A co-worker got me curious about this topic when our group began noticing unusually high bandwidth usage on everyones MiFi devices.  Since these connections are metered we began noticing rather quickly that something was consuming massive amounts of data causing the bill at the end of the month to be unbearable.  Of course we blamed each other for too much Youtube or other such things but as we looked into it, the common thread was that we all used some form of Virtual Machine.

After looking at this thread I did ask around and just about everyone in our group had some form of virtual machine running in the background OR had the app open with their virtual machines paused.

I ran my own tests and discovered that if I went to:
/Applications/VMware Fusion.app/Contents/Library
and ran:
sudo ./vmnet-sniffer -e vmnet4

vmnet4 is the internal network that I am using for all my virtual machines in order for them to talk to one another.  This network was a private network with no connectivity to the internet so I never even considered it a culprit to the increase in bandwidth consumed on my MiFi device.

As it turns out.  Up until VMware Fusion 6, even having all your virtual machines paused, there was still unusually high levels of chatter going out through my MiFi device.

The problem seems to have gone away with Fusion 6 (when the VMs are off) but when the virtual machines are on the issue is still there.

If you have no need for WINS, or NETBIOS over TCP/IP..... Turn it OFF. 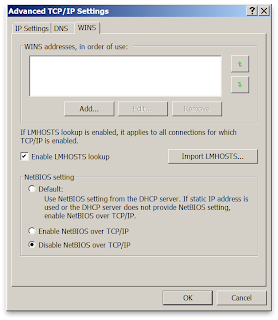 Unless you are testing some application that still uses it all it is doing is causing constant chatter on the network.  Which, if your main connection to the internet happens to be your cell phone or a MiFi device.....  Get ready for a big bill.